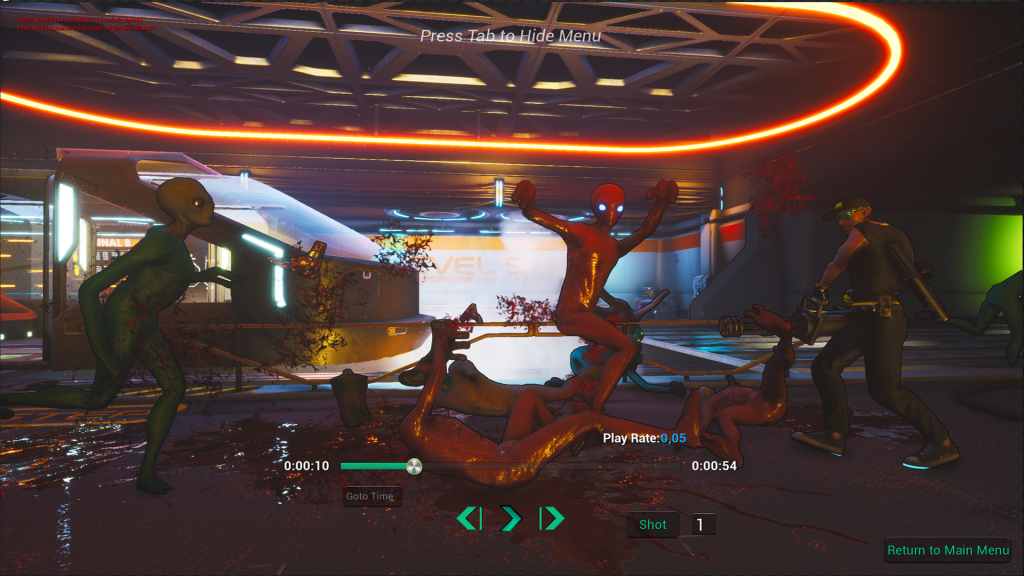 In my last Devblog I mentioned my wish to have a Replay-system/cinematic-like system in Zedfest, and that is what I just recently have implemented into the game 🙂 . When you are ingame, you may choose to record your session. Once you are done killing/slicing and punching Zeds you can watch the session again from the Menu. When you are in the session-viewer you fly around using a free-mode camera and with the ability to fast forward, use slowmotion and even pause the game while maintaining the ability to spin the camera around. Not only is it hilarious and a bit therapeutic seeing everything in slowmotion, it is awesome for taking screenshots and making entertaining videos with. I think this is a good complement for content creators and players in general that just wants to play around :).

Of course you don’t want the editor UI enabled when making a cool video for your Youtube channel, and it is easily toggled off using Tab or using Gamepad Left Shoulder on a Xbox/PS controller.

The customization menu only worked in the Main menu earlier, wich sucked because if you wish to respecc perks, switch characters, change loadout or Emotes, you had to leave the game, change all the things you wanted to change, and rejoin the game. Unnecessary steps and will only cause frustration.

That vital part of the game experience is now fixed in the sense that the same customization menu you got in the Main Menu is now also available in the Lobby. it’s convenient for the players and feels very needed.

Perks is next on the agenda to refine and make better. For example, I want the classes to have special abilities in wich you unlock when the class reaches say Lvl 15. The Stalker class may choose from stealth(invisible a short amount of time) or double-jump. The Assault class may choose from 50% added HP or 50% more bullet damage.

I will also start working on different gamemodes. Objective mode, you complete objectives to get further into the map. Some sort of Ragdoll mode would be awesome too. I mean, I have made the player characters update their ragdoll positions over the network. Pretty jittery at the moment but it would be awesome with some multiplayer ragdoll-mode 🙂 .

That’s all for today but stay tuned, I will be back soon with more updates 🙂 .