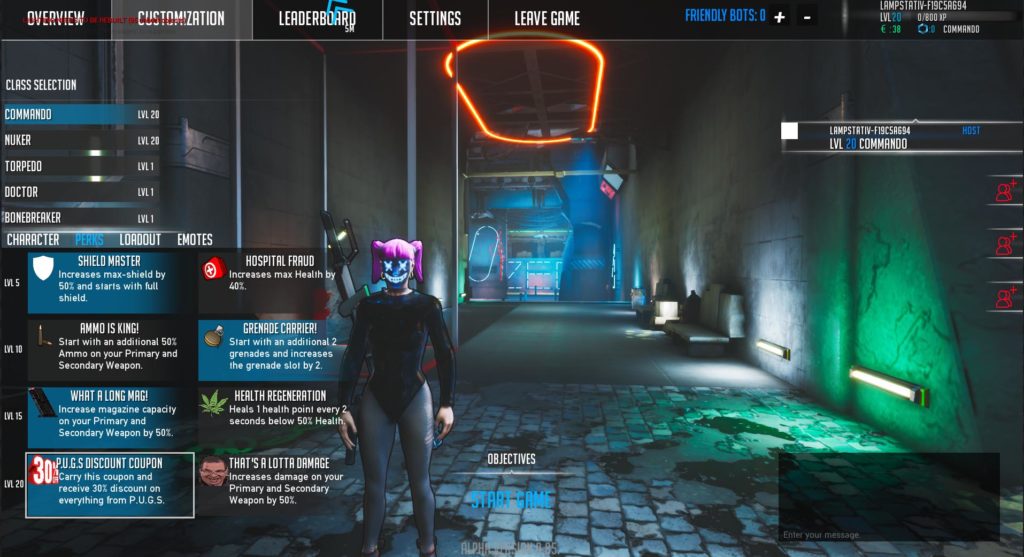 Hey everyone! Devblog time! I haven’t updated the blog for a while, but Zedfest have seen lots of updates and fixes since the last Devblog. Everything from cheat codes to upgrading the Ingame store to something much better and easier to navigate.

We’ll start with the Ingame store. That is the store that pops up when you succesfully finished a wave. The store, called P.U.G.S (Portable unattractive Gearshop) spawns at different locations each time, up to 10 different locations per map. A pointer will show the location of the store. The store automatically closes and disappears when the next wave starts. In the store you have the oppurtunity to refill ammo, buy medkits, refill Armor and of course change your loadout. Some classes have a perk that reduces all costs at P.U.G.S by 30% which come in handy when you have to buy a lot of ammo at the higher waves and harder difficulties.

You chose class to play with at the lobby. Now if you would like to change your preferred class ingame, you have the oppurtunity to do so at P.U.G.S for a small fee.

I’ve played a lot of GTA in my days and love to use the cheatbox from time to time (don’t we all?). So of course I had to implement cheat codes into Zedfest. Every weapon and character is attainable BUT, when you use a cheat code in Solo or Multiplayer mode, no progress made during that time will be saved and counted. So while it is nice to be invincible and have unlimited ammo from time to time, you will not be rewarded.

As stated earlier, each class have a total of 8 perks to choose from. But you can only have 4 active at a time, one on each row. Row 1 unlocks at class level 5, row 2 at level 10, row 3 at level 15 and row 4 at level 20, which is the max level for each class. The perks make each class unique and makes the player have more playing styles, thus further enchancing the enjoyment and playtime.

I’ve also worked on the Victory/Endscreen. When you succesfully complete all the waves including the boss, or you are all dead, you will get to the endscreen showing interesting statistics of your game, like total kills, best chain kill, total score etc. You can also compare stats with your teammates. Maybe I should implement some extra reward to the player with the most kills or something? I’ll see what I’ll add here later on.

Around 50 reported bugs have been fixed and there is a couple of them left that absolutely needs to be fixed before a release.I´ll make another Devblog soon showing other features and updates regarding Zedfest. Have a good one now everybody and take care in these gloomy times!