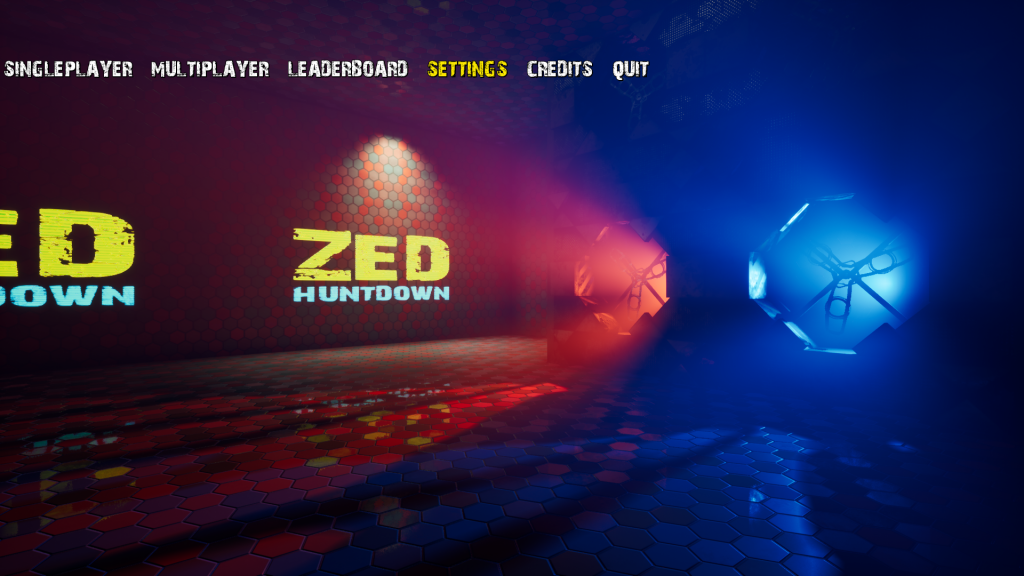 I’ve been working on all the menus lately. Starting with the main menu and basic functionalities like the options menu with sliders to change graphics and resolution. The ability to change keybindings is something I think most players would want so it is on the to-do list. I wanted to have a 3D environment along with my Mainmenu to make it look more interesting and went for this. Not too serious nor too childish.

The host game menu is made to be fairly dumb-proof. You can set your own servername, password protect so random players cannot join. There are 2 types of gamemodes at the moment, with the first one being Hordemode, which in this case means endless waves of different types of Zeds. To ensure the difficulty stays fairly the same with 4 players as if you would be playing alone i ‘ve added some functionalities in the Gamemode that multiplies the Zed-amount with current players with a factor of 1.5. So say for example Wave one spawns 10 Zeds with one player, it will then spawn 15 Zeds with 2 players, 20 Zeds with 3 players and 20 Zeds with 4 players. Changing the difficulty settings to Normal or Hardmode will spawn 1.5 and 2 times the Zed-amount that would be spawned from the Scrub difficulty. To explain it simple, one player in Scrub difficulty would spawn 10 Zeds, Hardmode would spawn 20 Zeds. 4 Players in Scrub difficulty would spawn 20 Zeds and 4 players in Hardmode would spawn 40 Zeds.

The other Gamemode is Objective mode, now this gamemode is not completely done yet but I was thinking something like finding different objects, place them in a particular place to unlock something which will open up a larger area. Turn on a elevator with a button far away so one player has to push the button and one player goes up the elevator, and up there the player needs to complete a puzzle to proceed. This is all just ideas in my head and not reality yet, so the objective mode is not set in stone, but I think you get the idea.

To make the game more replayable and competitive I added an Online Leaderboard that saves statistics from your gameplay on each map. Statistics such as Waves completed, difficulty settings, how many Zed kills you got and your total score will be uploaded to the leaderboard along with your Steam username. So even though it is a Co-op type game, you still might want to compete with your friends and save up to that Grenade Launcher to chain some kills 🙂

The lobby menu is fairly simple. Character selection with a widget showing character stats and attributes. A chat box to communicate with your mates. You can change to another map with all clients following the host. Only the host is able to kick, change map, difficulty and start the game, these buttons will not be visible for the clients, the Start Game button will instead be a Ready/Not Ready button so the host know when all players are ready to rumble!

If you are a lonewolf you have the ability to place 3 bots fighting by your side instead of your friends.

Yea I think that’s it for today. Making a game is highly addictive and I’m having a hard time leaving the computer hehe. Have a great day now! 🙂